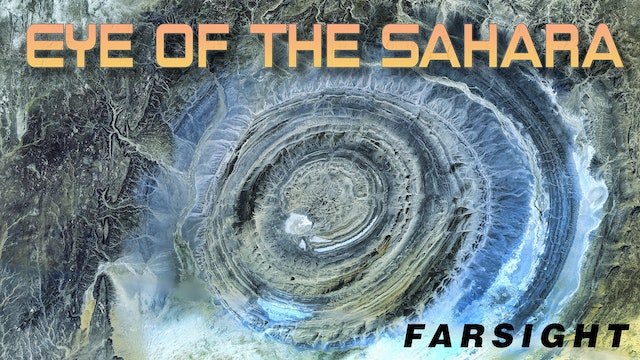 Eye of the Sahara

The Eye of the Sahara, otherwise known as the Richat Structure. In fact, it looks like a 25 mile or 40 kilometer diameter bull’s eye. It is located in west–central Mauritania, Northwest Africa. The first investigators thought it was the result of a meteor impact, but later investigators felt that it is a highly eroded volcano of sorts. The current theory is that it formed when the ancient supercontinent of Pangaea started to break apart. Following that line of thought, a complex scenario of how it formed as a volcanic pimple on the surface of the Earth that eventually burst, followed by erosion, is the theory of the day. But this is totally speculation. The only thing that scientists really know about the Eye of the Sahara is that it doesn’t seem to have been a result of a meteor impact.

There are two accepted reasons for this. The first is that there is not enough melted rock for it to be the result of a meteor impact, since meteor impacts of such magnitude normally melt a lot of rock. And the rocks that do exist at the site seem to mostly be from Earth. So the current theories focus on the idea of an old volcano, or actually, a volcanic bubble that collapsed. As you will soon see, the volcanic idea doesn’t hold water, bubble or no bubble. What really formed the Eye of the Sahara is something much different. No conventional theory really fits the facts. And the reason is that the Eye of the Sahara was not formed by anything geologically conventional.

If you exclude certain possibilities, such as any possibility that the Eye of the Sahara could be the result of extraterrestrial activities, then you are only left with ideas that you have to bend really hard to fit the known facts. In our experience, scientists do that a lot. They contrive theories to fit the facts that they want to consider, and they exclude theories that require facts that they are forbidden to consider. So, while we wait for the mainstream to get its act together, let those of us who are free from intellectual prohibitions look at the evidence for ourselves.