For those that have viewed the Farsight Area 51 video, I have no doubt that you will have found the content and revalations within to be astonishing but perhaps not entirely surprising.
Other with a vested interest in this location and subject matter will no doubt already be aware of some if not all of the contents here following the release of various forms of data along with the testimonies of various individuals who claim to have 1st, 2nd and third hand knowledge of the goings on at this location.
If one is to remain open minded and accept that some of this information is true, combined with the results of this Area 51 R.V session, then as Courtney himself suggests, we should ask ourselves, why would the U.S government choose to collaborate with only one race of E.T's and would that particular race have mankinds best interests at heart?

This also brings to mind the Crabwood crop circle of 2002, which when decoded stated,

“Beware the bearers of FALSE gifts & their BROKEN PROMISES. Much PAIN but still time. BELIEVE. There is GOOD out there. We OPpose DECEPTION. COnduit CLOSING.

Could someone be trying to tell us something?

There is a huge amount of information online regarding many aspects of Area 51 and the alleged activities that are currently being undertaken there and at the Dulce base.
Much of this information is open to subjecture and as such it is often derided by the Government and general media alike as 'pure fantasy' and the stuff of 'conspiracy theories'.

I have no doubt that a proportion of this information may well be false and misleading but I am also mindful that there their may be elements of truth here, that perhaps should not be dismissed so flipantly.

One such example, relates to an alleged former base security officer, Thomas Castello whose background unfortunately remains unverified. During Castellos alleged expose' of the base in the 1980's, he produced a drawing that was said to show the underground levels beneath the Dulce base which housed Aliens, Alien Hybrids various genetic experiments and cryogenic storage. He also stated that the underground base was being run jointly between the Government and Reptillian Aliens (Draco) who in turn control and work with with certain grey aliens.

Despite being labelled as a hoax by many, the drawing bares a remarkable resemblence to what we have been shown during the Farsight teams R.V experiment.

Once again, there is far more to this story than what can be written here, but for those that may be interested, I have pasted a copy of the base drawing below.

Is this pure just coicidence? Or could the drawing and Castellos story actually be valid?

You can read more about this case at http://tall-white-aliens.com/?p=1171 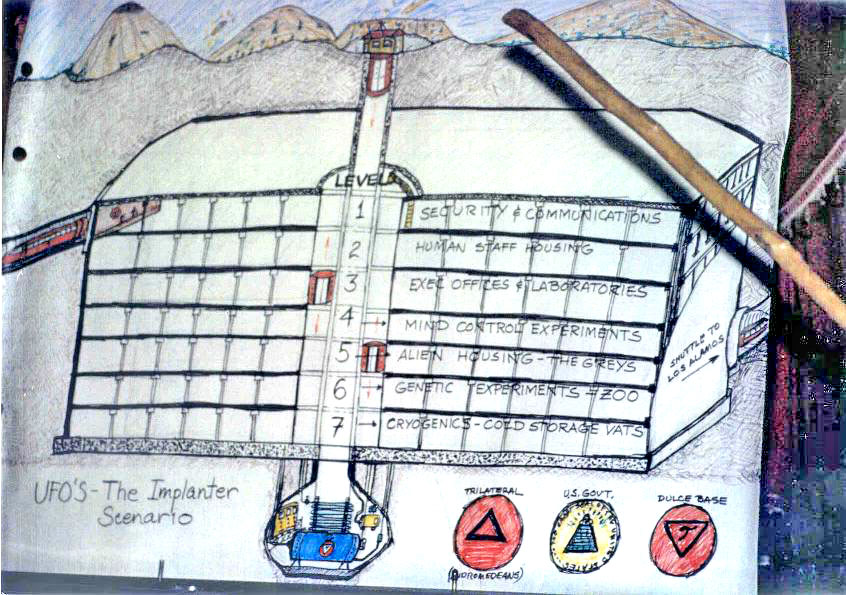 Great: reverse engineered craft, artifacts, and the US military industrial complex with its balls (STILL?) in the vice of giant psychic reptoids. I'm sure both of these groups are totally preoccupied with the well being of humanity...so i guess i can abdicate personal responsibility and leave it to them. Ugh. Kinda puts me in the mood to shoot skeet at the range.

I'm being sarcastic of course.

As always, great work by the farsight team😇