From the Farsight's projects / Intelligence Briefings we have 3 Major players around Earth:

But from over 50 years of research by Dr David Jacobs PhD - http://www.ufoabduction.com into abductions and first hand research.. he says the that hierarchy is something like this:

Basically the Mantis type beings are the top of the chain of the current negative type ET forces interfering in Earth affairs. Indeed Dick Allgire encountered one in the Giza Project,

What general faction do these beings come under? Reptilian/Orion/Other. 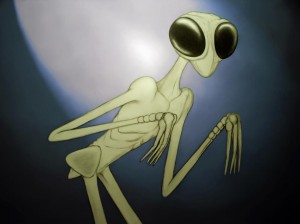 I think we should stray away from the generalization stuff. Imagine a group of XYZ race on another planet RV-ing earth and then generalizing “oh all humans must be like them”

Also in one of the ET news Aziz RV-ed a mantis being handed over from reptilians to a human.

I would like to know more about these beings as well.

YES, I WOULD LOVE FOR FARSIGHT TO "SEE", EVERYTHING ABOUT THE MANTIS BEINGS !!!!!!

WHATS THEIR AGENDA, ARE THEY THE TOP ALIEN COMMANDERS???...

Veteran and award winning researcher Linda Moulton Howe talks about a presidential briefing for President Ronald Reagan in the 1980s that listed the various races the USG is in contact/aware about.

The hostile ones at the top were referred to as "Trantaloids" and were insect beings from Epsilon Eridani.

Most of the article is behind an paywall, but Earthfiles is well worth the subscription.

Thank you for this. Fascinating interview.

I have heard lots about Corrado Malanga, he also developed an anti-abduction technique called SIMBAD:

He apparently found insights into the human soul / subspace aspect and uses this to stop potential abductions, etc. He is another PhD, from the University of Pisa in Italy. There isn't a lot of his stuff in English.. but I'd love to know more about him

Here is his hypothesis on why these groups (Reptilian/Orion, etc and farming us)
https://stopalienabductions.wordpress.com/what-aliens-want/

Something to do with our "subspace/soul" energy

"The entire species shared a hive mind, so the loss of individual workers did not concern them."

THE QUEEN of Sheba

From Dick's session on the Pyramid at Giza;

Simon Parkes did early videos and quite a lot of them describing his experience with the "Mantids" or Mantis. I believe he makes a distinction between the Mantis and Insectoids though. Mantis looks like what you the name implies but Insectoids apparently exist as well and are very nasty beings as I understand.

smoke some DMT and you will meet the insectizoids, indeed nasty.

***disclaimer**** Jon does not give medical or financial advice, nor does he offer advice on how to party, or meet dimensionals... :)

Mantis beings seems also plenty on the machine elves realm. Some call this space DMT hyperspace but what exactly is "hyperspace"? This could be another huge topic for the remote viewing, but those DMT entities were not all friendly toward to human too, it depend on your lineage I guess. I somehow connected with some mantis, and I believe they're more of scientist type groups. There could be over millions of different groups of mantis, insectoids not included.