I saw this and I can't Explain it

I seem to have got some intelligent responses to my posts. I suppose that you have earned this one that I was debating about posting.

About two years ago I saw something that I still can not explain. I compose classical music. I am 100% self-taught. Sometimes I just keep going deep into the night because my creative juices are blasting. One night I was composing in my DAW [Digital Audio Workstation] on my desktop computer. Suddenly I noticed something moving behind me. It was a semi-spherical globe with half white/orange light like a candle. It was moving in the air in a parabolic motion above my right shoulder. It was high enough to be awkward if I had tried to leap up and touch it. It kept moving a bit like how a planet moves.

I was sat in my chair. I thought what on earth. I saw the time on my PC: 3 am precisely in the dead of night. I kept watching it moving and it lasted for a minute and a bit. Then it seemed to fade or vanish. The time by then was 3:01 and a bit am. I was open mouthed: what was that? It didn't scare me much. But it perplexed me.

Yes, I am fully aware of all the 3 am stories and the photos of "orbs". I didn't photograph it. I don't have a phone; I hate them. Yes, I am that kind of tech dinosaur. I was a total skeptic towards both orbs and the whole 3 am motif. I am still a skeptic. But let's try some of the probable explanations...

- light reflection. They don't last over a minute,.
- truck coming past and shining through my windows. Yes, I live near a highway. But it was from inside my house and truck lights last about 10 seconds and I know what they look like. It wasn't that.
- fireflies. No. Don't get them where I am. Didn't look like any insect anyway.
- Tiredness/eye strain etc. No. It wasn't like any of that.

I could go on and on. But to be concise, nothing probable works. We are left with the improbable. Was it Sherlock Holmes who said that when the probable is eliminated only the improbable remains? To me that leaves two explanations that are outside of the esoteric/occult.

- Ball Lightning. Controversial whether it is lightning at all; it seems to occur indoors. It didn't look like the ball lightning in documentaries.
- I was using so much energy composing music that maybe the sphere was an output of my own creative energy.

I stress that these are very improbable. But to me only the improbable is left.

If those don't cut it then ONLY then would I consider occult/esoteric ideas like orbs. Yes, for all the scientists in the thread who will say "one observation" does not scientifically prove anything, you are 100% correct.

Yes, a bit like that in terms of the type of colour. But more spherical and smaller. About that height as well.

Then it's probably a Merkeba, or the consciousness of a Soul:

They spin very fast giving the illusion of being a circle.

Interesting story. It is my guess that you'll never know exactly what or who that was. I have never heard of a 3 am thing and as many years as I've researched all things new age/esoteric/parapychology, I'm a bit surprised. I will look into it.

Read "Amityville Horror" when I was a teen, and it had issues often at 3:15am. Pig with red eyes floating outside upstairs attic window. Weeee... Many artist find inspiration in the wee hours. I'm not surprised. Had an orb experience that our cat, and my wife noticed while taking the picture. Like a tiny dust speck of smart light. Looked exactly like a mote of dust you'd see floating, slowly moving, within a ray of light slicing through a partly open curtain in a darkend room. But this one had intention, and changed direction at speed. I was reading a book out loud to my wife who was in the other room. Book about James Padget's work; a collection of his channelling works (Vol1). Coincidence? It's getting harder and harder to call things that anymore. Managed to capture this tiny orb zooming through frame, cat starring right at it!

My wife poked her head around the corner as I was reading. When she saw the cat's chosen spot to lay was adorable, she got out my phone to snap this picture. That little white translucent dot visible just off the paws of our cat (Sean Connery), was caught as it was making an elliptical turn. It came in, made a tight 180 corner, and zoomed back out up and right of frame the direction it came in. Caught it nicely in the bottom of that turn.

OK, here is the TLDR of 3 am from an occult perspective. The general principle is that 3 am is the deepest point of darkness, the nadir to use an old school term often found in pre 20th century astrology books, and for people who practice magic 3 am is a time to do things. Over the last 5 or so years there has been a torrent of "3 am" stories on the internet where people see Slenderman at 3 am, or get woken up at 3 am by shadow people etc. Again, I am a total skeptic towards all of that which at least means that my experience isn't pre-coloured.

Thanks for the explaination. I've had experience with 11:11. I've heard that it's a wake up call to all the lighworkers. But your 3 am thing would frighten me.

A more detailed explanation of 3 am would also go into the Arthurian tales. In them you see the ideas of occult day and night; in one tale a knight fights a warrior who is powered by the sun and gets maximum power at noon. The knight parries his blows until afternoon drags on and the sun warrior's powers weaken. After that point the Knight wins easily.

But I agree that most people would have been a bit frightened by what I saw. I suppose that I wasn't because I had other experiences of occult/mythological things that had got me a bit used to seeing things. I can't talk about those things publicly. Well if I did it would be like the final scene of the movie Contact. I would expect anyone normal to say that they don't believe what I saw. I would respond like Jodie Foster and say if I were in your position I would not believe my testimony either.

If you want to attempt communication there are now Radio Frequency Apps:

Um. Just no. I have never used Spirit boxes or anything else of that type. They are dangerous and if I watch someone on YouTube using one I get a VERY bad feeling about it to paraphrase Princess Leia.

Between you, me and the gatepost, 99% of people on YouTube who use spirit boxes are fakes, because if they did contact the things that they claim they would be driven mad and not be able to post a video again. They would be literally scared out of their minds. BUT that is NOT to say that a fake experience cannot also be dangerous in many ways. It still can.

As I always say from a Mental Health standpoint, if you are concerned for your Mental Health then refrain from this type of activity and seek Professional help.

Seeing Orb's in the ways that are mentioned above isn't that out of the ordinary. I was just using youtube because it has a vast number of recordings of the same type of thing as you described.

Maybe you can or can't communicate with the Orbs. That will be up to you.

I hope that you are closer to having a theoretical answer. Stay Safe and consider doing one of the Remote-Viewing Courses by Trudy Benjamin or Princes Jenee.

Again you have misunderstood my post. I did not DO anything to get what I saw to appear. As for concerns about my mental health, you should take care of yours; you should not be looking at those kinds of videos.

>I did not DO anything to get what I saw to appear.

In a sense you have. You were positioned to observe it.

I suggest that the Orb, or Consciousness was trying to interact with you.

Perhaps it was the Consciousness of somebody that you knew and was trying to get your attention?

Many people believe that the Ashoka Chakra symbol is actually a picture of the Soul, and that there are times when the Soul is out of body that it can be observed and even photographed: 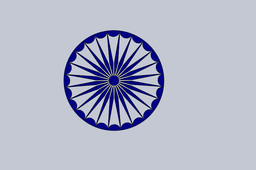 >As for concerns about my mental health, you should take care of yours

I think you misunderstand me and actually I take care of my mental Health more than I care to share.

If someone mentions in conversation that they are having concerns with their mental health, all I say is 'go get that checked out'. Obviously by someone that has Qualifications and is Certified.

Nothing more - nothing personal.

I'd say the same thing about a broken leg, or any other medical condition as I simply do not work in the Medical Profession.

Hello Calculus the Roman of Dental Deposits,
Have you seen any since or just that time two yrs ago? See these everyday myself but not bright orange or yellow like you described but white mostly and also grey ones they can vary in size from like gumball or golf ball. Have recently seen orange lights in sky though different and new compared to white and yellow lights. But really don't think it's anything to worry about with that time of day especially being a bright color like that did it feel threatening to you in your instincts? Had a spirit animal white and blue appear like a small cat one night late around that time when couldn't sleep feeling sad and felt comfort and said thank you for cheering me up. Also get best activity outside skywatching from 2-5am