Finding and Calling Out the Lies.

Anyone who has found something that smells, looks, and/or feels like a lie, put it in here so we could check it all out, therefore, we can cut through the garbage and find out what is the Truth.

I just found something that really boggles the mind. It seems to be Elon Musk has been lying about 'starlink' [so he could what? steal people's money?], that there is no such thing...that they are lying to us in order to cover up something they don't want us to know about. Now check out this excerpt:

Gosia: Do you know anything about Elon Musk's alleged Starlink satellites?

Swaruu X (Athena): It is said here that Musk's satellites are fake, put in place to cover the operations of Federation ships.

So, my question is, cover up the operations of federation ships... FROM WHO?

Here's the link to the video and the transcript if you want to read it all. After I heard the video, I went to go read the transcripts. Perty important stuff here you know.

The subject of the Starlink satellites warrant further investigation because the intel coming from Elena Danna, Alex Collier, Megan, Rose, and other contactees claims they are good for humanity. They state that the satellites use quantum technology that will shift from a closed, controllable system to an open system that will grant us contact with other races and cannot be manipulated as has been the case thus far. I'm not an authority on this topic, but I think more evidence is needed before making assertions one way or the other.

I think you're absolutely correct. Who is Elana Danaan? I got her book in PDF form and read it, or as much of it as I could stomach. It sounds very fishy to me. And she sounds pretty duped. She's a lovely lady, but life is full of pretties and lovelies that are being used unwittingly for a nasty agenda against us...those who are really behind the illusion of prettiness, would be 'them.' At the same time, Elana Danaan may in actuality be a good lady and all that, so we need to discern more than her, as an interface, between us and them.

And Alex Collier. Another similar situation. I did read and listen to some of his material. And then I read Theresa Talea's book to find out there is a group called the "Andromies" and they are predators. So, one thing needs to be realized especially, and that is that we need great amounts of discernment in order to know whether there are these good beings who are talking to a Human being, who have isolated him from the rest of Humanity, so they could use him as a mouth... and those others who are perhaps not so openly in communication but are around somehow helping and being beneficial. It's something we just need to practise in ourselves to find out which is which.

Megan, Rose, not sure about them. Haven't read or listened to much or anything of theirs that I remember.

We all know, though, that predators are the first one's to come around and slather the sweet words sliced with bitterness in between which they hope we wouldn't notice. So, being aware when you hear these stories, by listening to what you can pick up as truth, versus what they are trying to deceive us with, adding to all this your own already found out truth which is known within you, will help to make it easier to gather the knowledge we need to proceed safely.

I have difficulty being convinced that Elon Musk is a villain in our plight for freedom against the old empire. Even if Spacex never succeeds, he has been quite vocal in questioning why the hell are we not there yet.

But I admit, after what seems to me so many amazing solutions brought to us by his efforts, 2 main things: (1) why suddenly the giant push for a digital mindlink? Isn't an empire capable of reading and controlling our thoughts not at least equally as frightening as the fear of an AI overpowering us? (2) why so successful, so suddenly? I realize we shouldn't assume that all noble success will be met with extreme resistance. Maybe the good guys do win sometimes. But in this case . . . like who is after him? I see no barons trying to quash his efforts.

You know, it's really interesting, Tazz, I'm glad you brought this subject up. I too have listened to him, and oh my goodness, there truly sounds like a genuine Man is in there, and trying to warn us. At the same time, it also sounds like he is being manipulated and used, as in puppeted, by more nefarious forces. Hence, why he would be seeming so ... in a mix? ... blocked? ... a cry for help or to help, but being held down?

It's a very complex thing from my view. We do have to stay in careful awareness though. This is our world and our lives all together. One man... there have been many men who have already been murdered by the cabal for speaking out... and yet one man may be trying to reach through to us without getting murdered as well.

It's like Cosmic Awareness said a few years ago ( I use to get the newsletters, Very Informative!), we should approach these situations we are now living in, as martial artists. You feel when the enemy is striking out at you so that you can block their move and turn around to still be protected, and while they are in that moment unprotected, you can push them out. Something like that. You get the idea though, about being a Martial ARTIST. It takes awareness, and that awareness comes from the center of your being, the Heart. Staying centered helps you to be a really fine Martial Artist.

Anyway, those are what my senses picked up, my Batman senses. Hahaha.
I like bats better than spiders. But they're cute too. So yea, anyone, use your spidey senses!

I think you could have a entire thread on Elon Musk.

The transcript was interesting - especially seeing the amount of satellites that are currently purported to be up there. And that's just STARLINK - let alone the others, who we don't hear much about. 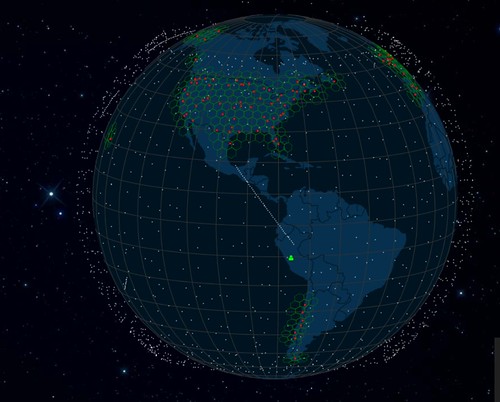 .
The Nano satellites are about the size of a loaf of bread.
There are quite a few tracker apps showing the positions of the satellites - though interestingly enough this is the notice on one of them today ... had to laugh... 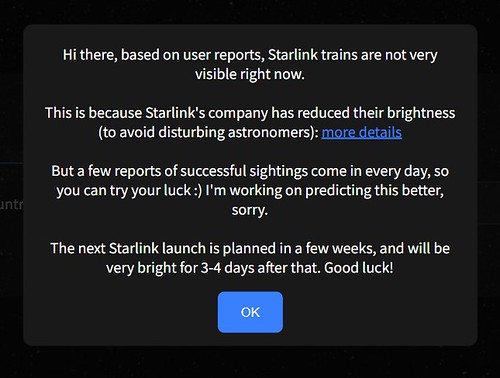 Oh my goodness, great catch. Boy does that ever coincide with what that Taygetan lady was saying!

I also didn't realize there were suppose to be other satellites from other companies out there. Good point. Geez, is that even true? Lol. Wow.

NATO not be engaged in the Ukraine conflict, that's what they say.
Look at this:

Interesting loophole. You don’t need to be a paying member to comment on the forum 😂

What do you mean? Did your subscription run out but you're still able to get through? Hm. Maybe you're still needed here, hahaha. Well, welcome back. Lol.

THE PREDATOR, in order to catch their prey, will use what Carl Jung termed "projection." They will project the most horrible thoughts into your mind hoping you will think those thoughts are your own and believe them, because would you to believe their horrible thoughts they send to you, then they have broken down your barriers and made you more alike to them since you believe you are that horrible thing they said through the invisible connection they send into your Mind.

And being that, "like attracts to like," they are that much closer to sucking your vital or Qi energy as a vampire would, and the closer they get to you, if you don't fight back throwing those thoughts out and back to the original sender of them - the predator; then they will work next on possessing you, which means taking over your thinking process so that you will instinctively without thinking just do whatever they want you to do...which would be to start problems with people around you because you're getting fed negative thoughts by the invading entity making you think someone outside you is thinking this or that about you, or you misinterpreted their actions around you so that you took offence, when in reality, it was all in your own world of thoughts where the negatives hide, which keep building and building until you too become a "projector" and project all your own nasty attitudes on others (the result of not being responsible for your own self which would be to keep a vigilant eye on your own inner world to protect yourself from invaders who would to sneak in unnoticed would you to be too lax, like some of the subliminal advertising going on today from large corporations), which makes the predator very happy because they can then attack other people's energy who are weak and succumb to that attack from you, and thereby they can feed off their vital life force energy as well.

Predators don't have an Essence. They lost it a long time ago. You have an Essence. Keep it! Realize what I'm teaching you here is true and correct. And the first step in protecting yourself is KNOWING it is occurring, therefore you may do something about it TO protect yourself. Do it. Protect yourself from pirates/vampires/roaming lions/wolves, the cabal and their electronic and bio weapons. You are stronger than you realize. At the same time, you must realize it in order to use it. 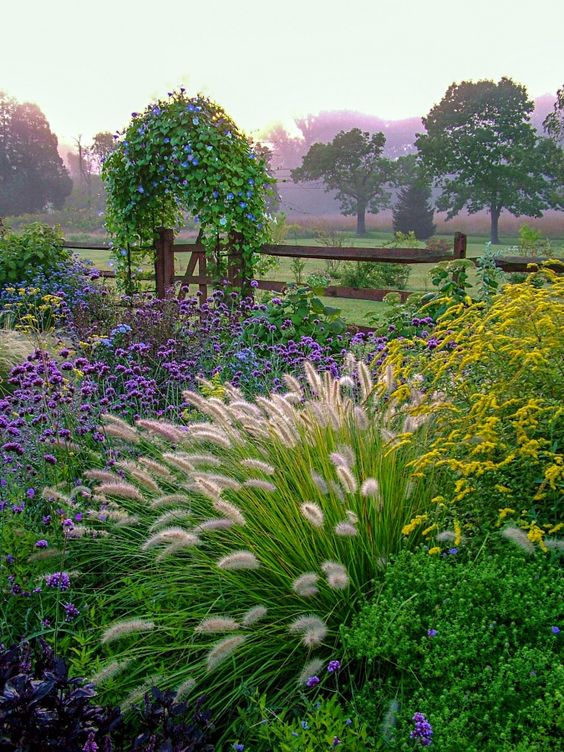 This teaching video by Mark Passio is truly superb. This is a very brilliant intelligent man. This is Part 2 of 4 in the "What On Earth Is Happening" videos.

He talks about these subjects in it, describing them thoroughly.

Me too! Totally. I could listen to his videos over and over they are so packed with knowledge and Truth!