Where did Courtney talk about project history?

I can't remeber which video it was, and I haven't found it again when searching for it. Does anyone know which one I am referring to?

excellent summary of a lot of the projects ! Thanks !

It's a very scary prospect. Without so many words and abating our depression, Courtney is basically spelling out our apocalypse in the next 2 to 5 years. Even worse than large scale death- but potential millions of years of enslavement.

I find myself in the crux. It's either another goddamn apocalypse threat that has been used over and over to scare us from being realistic, or else it's the real thing and for the most part all people are arm-chairing it for entertainment value, locked in skepticism due to all the former chicken littles.

There's a relevant Japanese expression for this kind of situation. しょうがない。

If you go to the YOUTUBE video - there are small clips of KEY MOMENTS which can be found when you click 'MORE" in the video description box.
They are headed:
On Behalf of Earth
Remote Viewing the Great Pyramid
A Farsight Project Uncovering the Mystery Behind the Anomaly on IAPETUS
The Phoenix Lights
The Crash
Oumuamua And the Bird of Prey

I'm watching it now and it continues to go through the Projects one at a time and explain the connections.

Here's an interesting thought that came to me when Courtney was talking about the Antarctica Expedition (approx 49:00) - it was after he mentioned the Presidential Negotiations with Extraterrestrials.
It sounds very far-fetched but there is still no reasoning behind the 'War in Antarctica' and at this point it seems like can speculate but ...

After the negotiations with the Reptilians for weapons and technology - Gizmos and Gadgets as Aziz calls them - is it possible that part of the negotiations was to test these things? Show the Presidentials what they were negotiating for?
And where would that technology be manufactured, tested and stored - Antarctica would be a perfect 'manufacturing Plant & hide-away' for such things which are needed to be kept secret - Antarctica would make a great showroom for such technology. Now who could go to Antactica to test and see these things from the Human perspective - it would take a flotilla and a person who could command something that dangerous and clandestine. I guess that would be Admiral Byrde and Project.
I'm thinking maybe it wasn't a war as such - maybe it was a Test Drive in a Test Area. A simulated war - one to show technology.
It could explain why the massive amount and variety of Troops were present in Antarctica - some where certainly not necessary for an 'Expedition'.
It could explain why Admiral Byrde was said to have left Antarctica quickly. There was no need to stay - There was no UFO/Nazi defeat because it wasn't a war - it was the display and testing of the negotiated Gizmos and Gagets in Antarctica by which the Americans needed to attend.

When Byrde was being interviewed by the media about his expedition to Antarctica he said something which I think is unusual. The quote which sticks with me I found in an old newspaper -
'The Planes we are planning to build in the future will beggar the imagination - they truly will be flying freight cars' -
At the time the expedition was focussing on opening Antarctica up to mining and for research purposes - but he seemed very optimistic - not defeated or a failure.
Maybe he had seen a glimpse of the future technology and advancements and been part of an evaluation team on that Project.

Whatever the 'official' story is about Admiral Byrd and the war in Antarctica - its not what it seems and even the cover-up stories have illogical gaps.
Maybe a more intense timeline would give a better perspective
Would this scenario fit into a timeline of Negotiations and then the expedition? 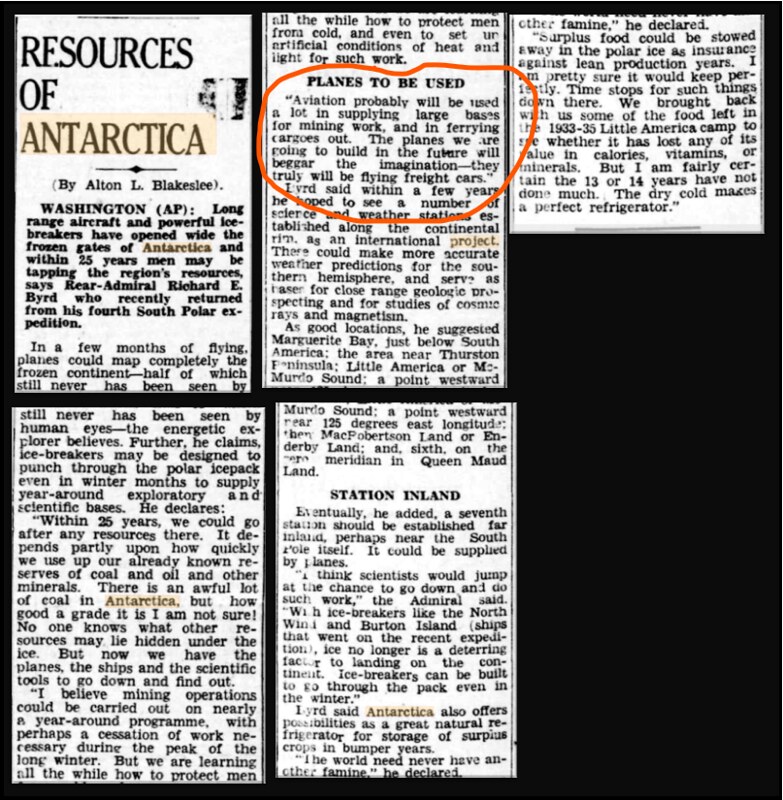