E.R.V -
Also let me give you an update on some of the changes that are happening to our video productions.

E.R.V is normally known as an abbreviation for extended Remote Viewing. This has been done for a long time in various circles, and the normal procedures for E.R.V are to cover the eyes, lie down in a dimly lit setting, sometimes listening to certain sounds or calming music, and then to achieve what is called a hypnagogic state, which is the delicate state between sleep and being awake. Then the subject attempts to perceive the target as is done with Remote Viewing. However, we here at Farsight see things differently.

You see we have found that whenever you change anything at all with the environment in which the Remote viewers are doing their sessions, you change a layer of consciousness in which the target is being perceived. For example, when meditating - changing the mantra changes the flavour of consciousness that is obtained when meditating. Similarly, sitting at a desk in an isolated setting after meditating produces a certain entry into a perceptual state such that a target is perceived in a certain way.

So, what we have been experimenting with is the idea that E.R.V or ‘Extended Remote Viewing’ as it has traditionally been done, is not actually doing anything special to perceive the target. It is not removing any physical stimuli that is doing the job, rather what the traditional approach is doing is actually changing the environment of the perceiver, and that change produces a change in the way the target is perceived. It is the changing of the environment and then attempting to perceive something psychically, that is the key here.

Again, change the environment of the perceiver and you will get some variation in the perceptions obtained, and you are still Remote Viewing the same place. It is just that you are looking at the target from a different perspective. You might consider it comparable to being in the same building, but you just took the elevator to a different floor.

Here is another example. One of the planned military uses of Remote Viewing was originally intended for its use in battlefield conditions where there is noise and distractions, and there are some indications that the military may still be exploring variations in this potential application.

E.R.V - Environmental Remote Viewing
Well here at Farsight we have been developing a new approach to changing the environment of the perceiver and we are trying to figure out new ways to combine these changes with normal approaches that we continue to do. For example, our Remote viewers always meditate before each Remote Viewing session - always - no exceptions. Then they do their sessions and write all of their perceptions down on an iPad. We rarely use paper for these sessions nowadays however, when we occasionally do use paper for our Remote Viewing sessions, we notice that this changes the environment of the viewer as well and our viewers have then obtained perceptions that have slightly different flavours to them. Change anything - anything at all, including the way you write things down and the layer of consciousness that is accessed with Remote Viewing – changes.

So, we are changing E.R.V to mean what we think it really does mean, which is not necessarily Extended Remote Viewing, but rather Environmental Remote Viewing. Change something in the environment of the Remote viewer and something will change in the nature of the consciousness that affects the perceptions.

So, E.R.V at Farsight means Environmental Remote Viewing and vocabulary is important so, we have been diving into this type of research a lot with respect to changes in the Remote Viewing environment. And you are going to see all sorts of experiments in our presentations, especially with these Mysteries Presentations.

These changes will be combined with our traditional approaches for Remote Viewing not instead of. For example, in addition to our paper or iPad sessions, then you will see our light board presentations, and then you will see something like this mixed in:
(Video screenshot below - from video. See example on 2021 Oct Human News Forecast video 07min 30sec timeline) 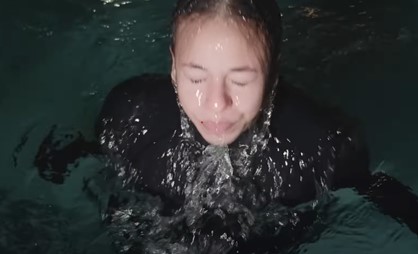 The Farsight Approach
Friends, come along with us as we explore consciousness in new and innovative ways. So often we have heard others disparage new approaches to Remote Viewing. So often we have heard things like Ingo Swan would be turning in his grave, or this isn't how the military did it in the unit, or even things like; to do Remote Viewing you must use a certain type of fan fold paper, or you should not combine the use of Remote Viewing with extra-terrestrial targets… and on and on goes the list of intellectually rigid limitations.

Let us be clear, Farsight is known for pushing the boundaries of experimentation with Remote Viewing. That is what we do, we push past existing boundaries into new realms while always keeping an eye on the science, doing our sessions blind, and always, always trying to blend verifiable elements with the unknowns of our project. For example, when we study the construction of the great pyramids of Giza the verifiable element is the pyramid itself and its environment. Then we get the new elements involving unknowns as well, and we blend the verifiable elements with the new information involving those unknowns. So, keeping it scientific is a Farsight constant, but pushing past the unknowns is also a Farsight constant.

E.R.V Environmental Remote Viewing starting in mid-October with our Lucifer project and then also in future Mysteries Projects streamed at Farsightprime.com
Look for it.

Thanks Del, for a not native English speaker this is a useful addition for me, useful to hear and read.

I have just finished transcribing this months 2021 October Human News Forecast (with pictures) in full as well.

Its an easy read - you can find it here on the forum:
https://www.farsightprime.com/forums/general/51603-2021-oct-human-news-forecast-transcript-comments